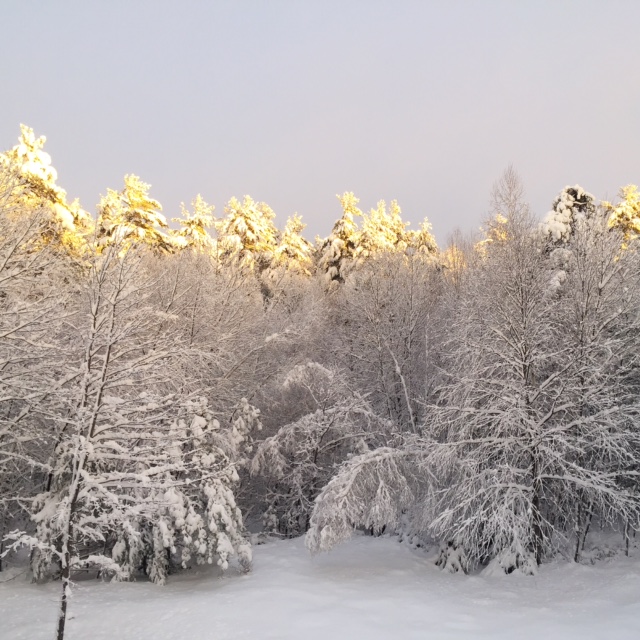 Who wouldn’t happiness include in such an un-doctored juncture of mind and snow heavy trees–suddenly lit by golden caps of sun in the late afternoon. A small palette of colors, a short window until New England dark descends, and a surprising view challenge Megan and me to grab her camera and capture such ephemera in ‘oohs and aahs’ for lack of more explicit words.

Early this morning, even the relatively drab appearance of the sky cannot quash some anticipatory spark as each hint of sun delights.

To apprehend with a gossamer mind might illuminate what’s been previously unthinkable–living in the shadow of assumed impossibility. And to have close to hand a quirky hammer for nailing the unusual thought to an open-ended wall for further contemplation.

Attention, attention, I cannot think of a greater gift one being can offer to another but an undivided beam of warm and curious attention. But we are sitting, these days, at tables whose place settings include, not only forks and knives, but phones and IPADS, for the main meal. Our faces, like sunken moons, live in their borrowed light.

Happiness is unplugged, unfettered, free and in-the-face, before and after the followers and unfollowers, the friends and unfriends, the glued and unglued have documented their moments in coffee spoons or shot glasses or Instagrams.

The ludic inventiveness of mind, so so happy, and reflected in these complex toys and applications, becomes dulled by the overuse of these contrivances. As if inventiveness might erase the need for itself because of its inventions. But that is a drab thought. Not a happy one.

The camel stretches, awaiting marching orders on this mostly uncharted terrain of happiness. Such vast sands of possibility juxtaposed against the trackless snow of this New England morning.

Guest saddle: Upon what or whom do you lavish your attention? What grows in the beam of it?